The "Love & Kindness" of Xians in Action 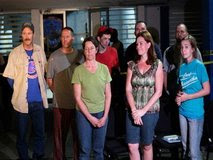 This blogpost is in response to the story of ten American Baptist missionaries who went to Haiti to express Xian "love and kindness" to Haitian children.

They are so sincere in their "love" and in their desire to do deeds of "kindness," but that does not excuse the crimes against humanity of which Xianity is guilty. The same excuse was given for the Inquisition, too. They killed our bodies so they could "save" our souls, all in the name of Xian "love." And what about the Jewish children who were "rescued" from Hitler's y"s fires only to lose their Judaism to the "kind" Xian families who offered them shelter.

This story has been repeated over and over again, all across the world, over centuries and centuries of Xian abuse of "love & kindness."

The lesson for Jews: Know Thine Enemy!! And stay far, far away from them. Don't be sucked in by their self-serving "love and kindness." Don't be partakers of and participants in their crimes, G-d forbid!

Here are some telling excerpts:

...The Baptists from Idaho were waiting Monday to hear if they will be tried on child trafficking charges for attempting to take 33 Haitian children to the Dominican Republic without official authorization.

Child welfare groups expressed outrage over Friday's attempt, saying some of the children had parents who survived the Jan. 12 earthquake. Prime Minister Max Bellerive denounced the group's "illegal trafficking of children" in a country long afflicted by the scourge and by foreign meddling.

...The Baptists' "Haitian Orphan Rescue Mission" was described as an effort to save abandoned, traumatized children. Their plan was to scoop up 100 kids and take them by bus to a 45-room hotel at Cabarete, a beach resort in the Dominican Republic. The 33 kids ranged in age from 2 months to 12 years.

They were stopped at the border for not having proper paperwork and taken back to Port-au-Prince, where the children were taken to a temporary children's home.

...Without proper documents and concerted efforts to track down their parents, children could be forever separated from family members able and willing to care for them. Bellerive's personal authorization is now required for the departure of any child.

"For UNICEF, what is important is that for children separated from their parents, we do everything possible to have their families traced and to reunite them," said Kent Page, a spokesman for the group in Haiti. "They have to be protected from traffickers or people who wish to exploit these children."

He said it was possible the Americans arrested may have had "good intentions but misguided execution."

The Idaho church group's spokeswoman, Laura Silsby, told the AP from detention that the group was "just trying to do the right thing" amid the chaos. She conceded she had not obtained the proper Haitian documents for the children.

The children were taken to an orphanage run by Austrian-based SOS Children's Villages, where spokesman George Willeit said they arrived "very hungry, very thirsty." A 2- to 3-month-old baby was dehydrated and had to be hospitalized, he said. Workers were searching for their families or close relatives.

"One (8-year-old) girl was crying, and saying, 'I am not an orphan. I still have my parents.' And she thought she was going on a summer camp or a boarding school or something like that," Willeit said.

As the poorest country in the Western Hemisphere, Haiti is in a difficult spot — it needs aid, but deeply resents foreign meddling. Many have mixed feelings toward Christian groups that funnel hundreds of millions into missions in Haiti.

[If their goals were truly altruistic, they would give over these facilities to the Haitians to run where it would not be possible to use them as a means for slipping the gospel in under the cover of charity. But then this would defeat the whole purpose of building them.]

"There are many who come here with religious ideas that belong more in the time of the inquisition," said Max Beauvoir, head of Haiti's Voodoo Priest's Association, which represents thousands of priests and priestesses. "These types of people believe they need to save our souls and our bodies from ourselves. We need compassion, not proselytizing now, and we need aid — not just aid going to people of the Christian faith."

[Yeah, a voodoo priest, I know, but he's still right about the Xians. Note well: The money raised by Xian missionaries for "poor, impoverished Israelis," also goes primarily, if not exclusively, to Xian recipients to enable them to live and thrive among the Jews they hope to proselytize.]

...The Idaho churches had elaborate plans before the earthquake to shelter up to 200 Haitian and Dominican boys and girls in the Magante beach resort, complete with a school and chapel as well as villas and a seaside cafe catering to adoptive U.S. parents.

The Xians have one big mitzvah, to spiritually procreate and make other little Xians. And they don't care who gets hurt while they're doing it, because they are convinced that their way is the right way...and the only way.