Xians have always been deceptive and manipulative in their conversion efforts towards Jews but with "Messianic Judaism" they hit the jackpot. Many Jews mistakenly believe that "messianic Judaism" is a stepping stone to the truth of Judaism for goyim. While some converts did pass through "messianic judaism" on their journey from the church to the synagogue, they are few and far between and this happened mostly in the 90's when mainstream Judaism saw "messianic judaism" as a missionary tactic. Hashem brought true truth seekers out of xianity to Judaism or Bnai Noach in spite of "messianic judaism" not because of it. The proof of this is the tens of thousands who have been exposed to Judaism, some even learned from Rabbis for years, and yet are still messianic, still worshiping their false g-d. Many more Jews have crosssed the "messianic judaism" bridge to xianity than the other way around. Messianics are the most extreme in their beliefs devoting all their money and effort and lives to converting Jews. They believe they are soldiers for yeshu fighting a spiritual battle and we need to wake up and fight back. They are the most dangerous threat to our people specifically because most Jews don't see them as a threat. They come as "loving brothers" to serve and save us. They speak like Jews, dress like Jews and act like Jews. They tell Jews that "messianic Judaism" is just another stream of Judaism. If a Jew accepts the "Rabbi Yeshua as his messiah" he becomes a completed Jew not a xian, according to their logic. This is the greatest threat to the Jewish people in our generation, not Iran or Syria or the palestinians. Those enemies only want to kill us physically and most Jews know they are enemies and Hashem will be with us to fight these enemies but the messianics want to kill us spiritually. They know what Bilaam knew, that the Am Yisrael can't be defeated because Hashem is with us. The key is to turn Am Yisrael to idolatry so Hashem will leave us then they can defeat us. So this is what the daughters of Moav did. They enticed Am Yisrael with love and affection and once they were bonded to them, they persuaded them to idolatry, then they lost the protection of Hashem and could be defeated. Baruch Hashem, there was one who saw the threat and was zealous for Hashem, Pinchas. His one act of courage saved us all. The worst part is there are Jews helping them. The messianics learn from religious Jews how to act, dress and speak so they can better deceive less educated Jews. Their leaders can quote the Talmud and their "churchs" appear as synagogues in every way. Fellow Jews, wake up before it is too late!

DO YOU KNOW WHERE YOUR CHILDREN ARE?

My fellow Jews, those who have sacrificed to settle our promised land, to give your children a holy, religious upbringing in the land of OUR forefathers, do you know where your children are?  Do you know who is coming into contact with them, speaking with them and even hugging them while you assume their precious neshamot are in the hands of fellow Jews who would protect them?

He runs a program that hosts volunteers from around the world where he trains "disciples" and takes them around Israel to missionize, part of the program includes tours of Israel. Posted on his facebook page were pictures of him speaking to Israeli children in the Shomron. 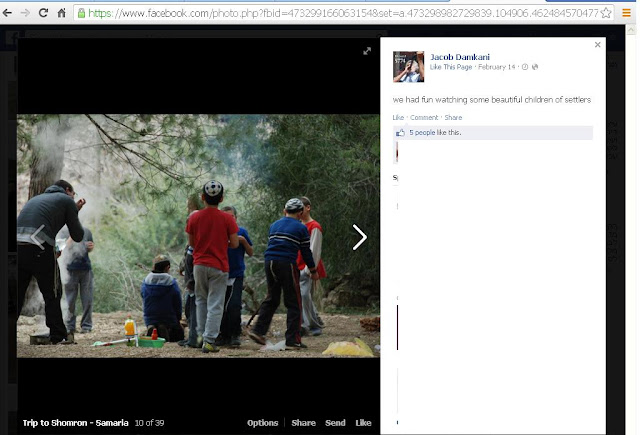 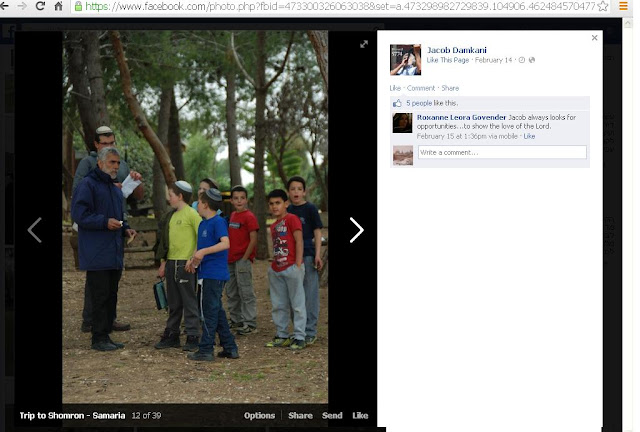 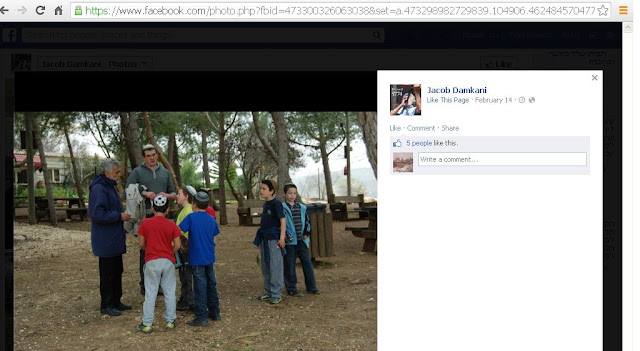 Obviously I don't know what he spoke to these children about but their parents sure should. This isn't the only xian to have access to children in the yishuvim in Israel.

Fellowship Church in Wintersprings, Florida has been bringing a group of volunteers every year for 8 years to build a park in Kedumim.  The goal of this is to "build bridges" and form relationships with religious Jews.   In a podcast (link no longer works) about their most recent trip to Kedumim, volunteer Gerri brags about their success,

"...they even bring children out from the school. Every class is instructed to come out to the park once a week and the kids come out."

The Lord must have sensed our drop in energy level (our average age for the 10-person team is 62.5, so that wasn't a surprise), because two different groups of school boys showed up at different times in the afternoon. Like a page out of Tom Sawyer, the boys saw us shoveling gravel or dirt and wanted in on the action: a blessing to both us and them, as they felt good about their efforts and we enjoyed stepping back and directing.

Hasel posted these photos of the children of Kedumim on this church's facebook page. 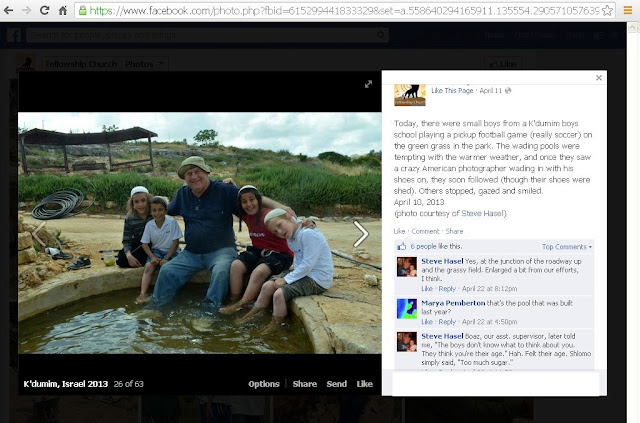 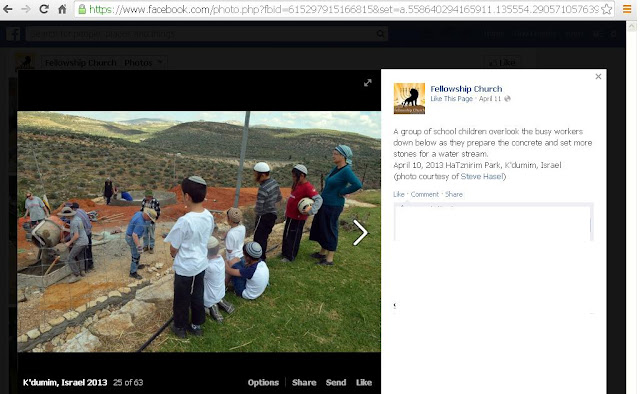 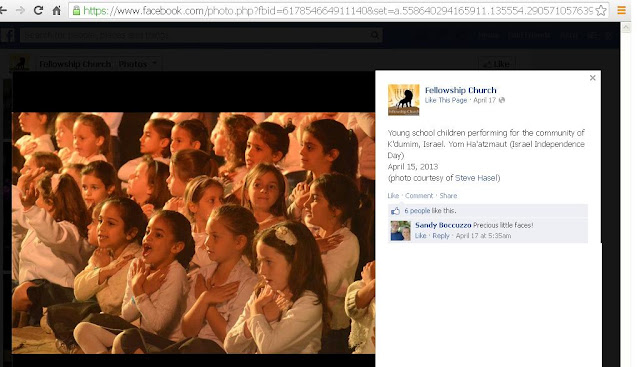 Day 5 was wonderful (as were days 1-4). We began with a pre-breakfast visit to a boy's school in NE Kedumim, just a half-mile from the park. I had met a few of the boys at the park on Wednesday, and they remembered "the crazy American" who sat with them in one of the wading pools. The principal is the son-in-law of Shlomo, our project director. The most interesting thing about the school is that it has a collection of small animals, birds and reptiles; inspiring for young students.

The latest fad for xian tour groups is to visit yishuvim and meet Jews.  Many xian groups are being taken on tours through the yishuvim on a regular basis.  Christian Friends of Israeli Communities takes donations from xians for projects; including playgrounds, daycares and summer camps. Plaques are put up to make sure that Jews know who they should be grateful to for these projects.

The CFOIC Heartland Israel office supervises the distribution of funds and completion of the project. Once completed, a plaque is hung in a prominent place indicating that the project has been funded by Christian Friends of Israeli Communities, a testament to the practical import of Christian support for Israel. 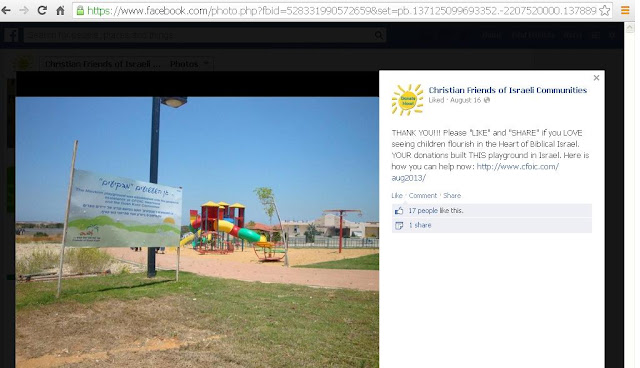 The xian benefactors can visit these yishuvim, on tours with CFOIC, to see what their donations accomplished and to meet the people.  This is going on in most of the yishuvim. Many of these xians take pictures of the children and post them on their facebook pages when they return home from their trips.

Posted by Geula Girl at 1:20 PM No comments:

WHAT IS MESSIANIC JUDAISM?

Xians believe their main mission in life is to "make disciples of all nations" but converting a Jew is the ultimate success in this mission.  To accomplish this,  xian organizations have spent much time and money over the last century.  At some point some xians realized that Jews would never accept a messiah who didn't resemble a Jew in any way.  They decided they had to re-brand jesus to be more appealing to Jews.  So he became yeshua, the torah observant, hebrew speaking, tsit-tsit wearing rabbi, messiah of the Jewish people.  They changed their day of worship from Sunday to Saturday, sang hymns in Hebrew, put on kippot and tallitot. They printed the New Testament in Hebrew and called it the  "brit hadashah". Their churches became "congregations" and their preachers became "rabbis". This led to a new stream of xianity, a Jewish xianity referred to as Messianic Judaism or Hebrew Roots.  Some messianics even went so far as to pay crooked rabbis for fake conversions to Judaism in order to make aliyah so they could live amongst, and spiritually influence Israeli Jews.  Now the children of those messianics are grown and very Israeli. They were born and raised in Israel. They speak fluent Hebrew and serve in the IDF.  Even though they are xian in their beliefs, many Israelis accept them as "brothers" and defend their right to their beliefs. They have been joined by xian immigrants from Russian, America and Europe who may or may not be Jewish according to halachah.  This has led to an explosion of Jews in Israel "converting" to xianity through Messianic Judaism.  All  messianics will tell you they don't missionize or try to convert Jews because they believe a Jew who accepts yeshu becomes a "completed Jew" not a xian. They claim Messianic Judaism is just another stream of Judaism like Conservative or Reform. It is NOT another stream of Judaism!  It's basic tenets are xianity and considered idolatry according to the Torah. Messianic Judaism has achieved in the past three decades what traditional xianity wasn't able to achieve in 2000 years and it is rapidly spreading throughout Israel.

According to many xians, Jews haven't accept yeshu for two reasons.  One being he was always presented as a xian goy.  The solution to this was addressed above.  The second is because of the horrible things done to Jews throughout the centuries in the name of xianity.  The solution to this is to love, love, love and support Jews, then they will "open their hearts to the good news of yeshu who can heal all their wounds and solve all their problems". To accomplish this they have created humanitarian organizations.

They prey on the weak and vulnerable sectors of Israeli society; holocaust survivors, widows and orphans, lone soldiers, the poor, victims of terror and new immigrants particularly Ethiopian and Russion Jews with little religious education. They offer them love, friendship and financial assistance.  Of course the string attached is yeshu.  According to the messianic video below, 90 % of the members of an Ethiopian messianic congregation in Tel Aviv accepted yeshu and became messianic after making aliyah.

Messianics are always on the cutting edge when it comes to converting Jews. They reach the secular Israeli youth through facebook, concerts and music videos.

They even have "outreaches" specifically targeting those Israelis that travel to India after their IDF service looking for a spiritual experience. Here is another one, and another one and another one.

Why should you care?
Messianics are the most deceptive, manipulative and dangerous of all xians.  They have removed all signs of traditional xianity and replaced them with Jewish symbols, clothing, speech even holidays for the sole purpose luring uneducated and unsuspecting Jews to xianity. They use our own teachings a prophecies to try to convince our people of their false theology. They are worse than murderers because if a Jew is murdered for being a Jew he dies al kiddush Hashem but if a Jew accepts yeshu as G-d, the son of G-d and mashiach, he receives the punishment of karet. Thirty years ago Messianic Judaism/Hebrew Roots was a fringe movement but it has spread through many mainstream denominations such as Baptist, Evangelical and Pentecostal. Unfortunately most so called xian zionists are affiliated with, associated with or connected to Messianic Judaism/Hebrew Roots Movements.