WHO ARE TOMMY WALLERS TEACHERS PART 2

The other speaker at Waller's Family Week was Lars Enarson.  He founded the Elijah Prayer Army

Yeshua also told His disciples, “Indeed, Elijah is coming first and will restore all things” (Mt 17:11). The Holy Spirit will be poured out upon all flesh and sons and daughters will prophecy. Like Elijah a righteous remnant will, in the midst of sin and darkness, give themselves to fervent, unceasing prayer, until the fire falls from heaven and turns the Jewish people to God.

The Elijah Prayer Army was launched in 1996, to specifically pray for the end time revival in Israel and the Middle East that will prepare the second coming of Messiah. We invite you to stand with us and thousands of other intercessors around the world, joining together in intercession as watchmen on the walls of Jerusalem.


To restore something means to bring something back to it's original condition or better. And friends this is what is going to happen in order to make ready a people prepared  for the lord we gonna see a restoration of what was in the beginning right here in Jerusalem because this is where it all began.

Yeshu says there will be one flock and one shepherd. Both Jews and gentiles will come together under his leadership in the last days.  We have been made one body with the Jewish people. Together we share one l-rd and one messiah and he is going to bring that body together the one new man of Jew and gentile in the messiah as everything is culminating here in Jerusalem.  We have to be watchman now on the walls of Jerusalem, praying for this restoration G-d has promised because yeshu will not come back until the time has come for the restoration of all things.

In order to accomplish this, he is starting a commune in his native Sweden to train missionaries.  The plan is that recruits will live and learn on the commune for three years before they are sent out as missionaries.  Part of their training will include volunteering in Israel with Hayovel.  Here is how he describes the commune,

CITY ON A HILL: A Spirit-filled Torah Community for Training of Disciples Focused on the Redemption of Israel.

“Go therefore and make disciples of all nations … teaching them to observe all that I have commanded you. And behold, I am with you always, to the end of the age” (Matthew 28:19-20).

Our Master’s way of teaching and spreading His message was by training disciples and sending them out into the world to make more disciples. He spent three years together with them, and His disciples saw how He lived, how He acted in different situations, how He prayed, how He ate, and how He celebrated the Feasts and so on. They learned His teachings and how He applied them.


Our goal is for everyone to come with us to Israel, at least once a year. We will also partner with the ministry of HaYovel, joining them in the grape and olive harvest in Israel in the fall.

Aug 4- 11 There will be an event similar to the Wallers Family Week to inaugurate City on the Hill.  Brayden and Tali Waller are scheduled to speak there.

(The link above has since been removed, which is typical so I am including here the screen shot.  Unfortunately it is in Swedish, but it states clearly the Brayden and Tali Waller are listed at this event along with Lars Enarson and his messianic son-in-law Doron Keidar.) 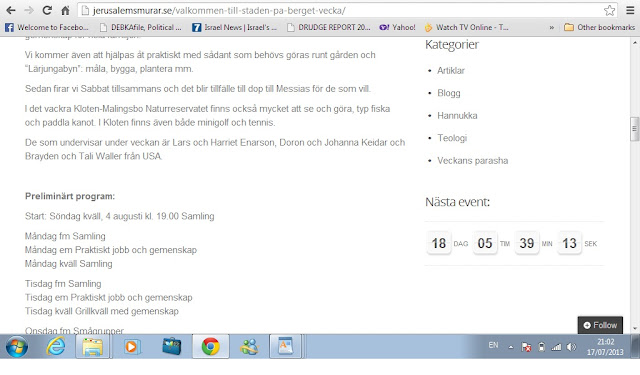