David Ha'Ivri and the Shomron Liaison Office have organized two events to take place Sunday, November 17, 2013 at a New York City synagogue.  In the afternoon from 2-5  there will be an Israel Advocacy Conference and in the evening there will be a wine tasting of Shomron wines. The purpose of these events is to bring together Jews and xians for Israel. 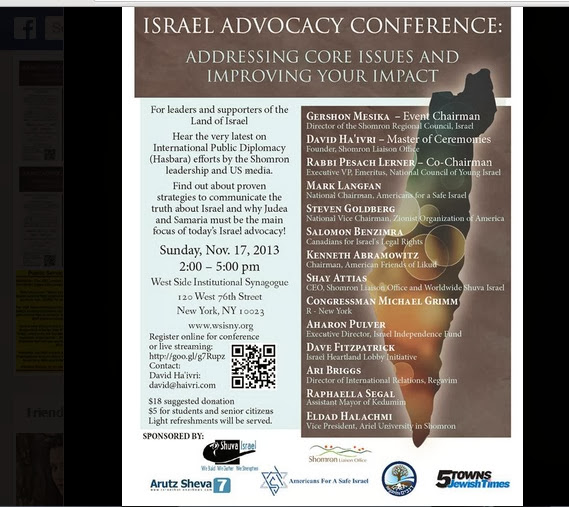 According to the flyer Dave Fitzpatrick is representing something called Israel Heartland Lobby Initiative. I can't find anything on the internet about this Initiative but there is much about Dave Fitzpatrick. Fitzpatrick has spent the past two decades of his life involved with organizations, events and personalities whose sole purpose is to convert Jews to yeshu.

In 1991 a small group of members including Dave and Peggy Fitzpatrick, left Belmont Church to start a new church which eventually became Grace Center in Franklin TN. Belmont Church was led by Don Finto.  Since then Fitzpatrick and Finto have reconciled and Finto occassionally gives sermons at Grace Center.  Don Finto is associated with the NAR, New Apostolic Reformation, who believe the conversion of the Jewish people will trigger the Second Coming.

In a 2011 article, Rachel Tabachnick writes,

Apostle Don Finto, joined by Messianic Rabbi Marty Waldman, delivered the Israel prayer at Rick Perry's August 6 prayer rally; not John Hagee.  Finto is a leading figure in an international effort to encourage evangelicals to support Messianics and their ministries to evangelize Jews. (Messianic is the term for Jews who convert to Christianity but retain their Jewish identity.)  Finto did not change his message for Perry's religio-political event, but  prayed for Jews of Israel and the world to convert. The belief that the conversion of Jews is the trigger that will bring about the return of Jesus is part of the end times narrative being popularized by the apostles of the New Apostolic Reformation (NAR).

Here is a video of Don Finto at the prayer rally.

Don Finto authored a popular and widely distributed Christian Zionist book in 2001.  In it, he quotes Apostle Dan Juster, head of an international network of Messianic congregations and ministries.

"I have become convinced that Rabbinic Judaism is a more severe departure from biblical faith than I had ever realized in my early days of Jewish recovery...The atmosphere of New Testament carried on the spirit of the Hebrew Scriptures pervasively and profoundly.  The essence of Rabbinism is a severe departure, replacing revelation with human reason...We who are Jewish are biblical New Covenant Jews, not Rabbinic Jews!"

Your People Shall Be My People

This Don Finto book is the classic text on supporting Messianics, befriending Jews, and gaining access to Jewish communities for the purpose of leading them to Yeshua (Jesus in Hebrew).  The name of the book is Your People Shall Be My People: How Israel, the Jews, and the Christian Church Will Come Together in the Last Days.
The book lays out both the reasons and the instructions for supporting Messianic communities and ministries and for proselytizing Jews. It has been distributed internationally, including through the largest single Christian Zionist event, the Day of Prayer for the Peace of Jerusalem, co-founded and co-chaired by Robert Stearns. (Stearns served as one of John Hagee's CUFI directors and was also in attendance as Rick Perry's prayer rally.)

From 2003 until 2009, Fitzpatrick was listed on the board of an organization called the Israel Relief Fund,with Finto and another NAR leader,  James "Jim" Goll.

Fitzpatrick has ties with Jim Goll, at least back to 1994.  Goll writes in his book, The Coming Israel Awakening;

In the summer of 1994, Dave Fitzpatrick, Avner Boskey, Richard Glickstein and I participated in Bernis's third festival, which was convened in Minsk the capital city of Belarus (White Russia).
We each had been involved in different prayer groups that conducted prophetic intercession for Israel and the Jewish people. But for a season we would be a team with specific prayer assignments.

Bernis is Jonathan Bernis of Jewish Voice Ministries. The festivals are events where Bernis preaches yeshu and converts people to xianity.  Bernis writes about the festivals in his book, A Rabbi Looks at the Last Days;

The miracle in the former Soviet Union was not that Jewish people were lining up to hear about Jesus.  The miracle was that the bias among Jewish people in the United States did not exist there. Jewish people were willing to come to our events knowing they would hear why we believed  Jesus was the Jewish messiah.  In each city of Eastern Europe where we brought the festivals, among the most moving experience for me was the opportunity to minister to Holocaust survivors.  With each festival we organized a special reception for Holocaust survivors and then seated them in a special section.  In the years between 1993 and 2000 when the festival ministry was at its height, we literally filled football stadiums.  At each event dozens of Holocaust survivors accepted the Lord.

Fitzpatrick is no longer the leader/preacher of Grace Center but is still involved with programs there. On October 6, 2013, he participated in the Global Day of Prayer event held at Grace Center. Todd McDowell served as Master of ceremonies and many pro-Israel xian leaders from Nashville were at this event including James Goll, Don Finto, Lynden Allen and Laurie Cardoza Moore.

Todd McDowell is the director of Finto's organization, The Caleb Company and is also on the board of Toward Jerusalem Council II. The vision of TJCII is to unite Jews and xians in order to usher in the second coming of yeshu.

This event was recorded live and can be viewed here. The event brings together messianic Jews and xian gentiles to pray for Israel.  The event was nearly 2.5 hours long.  I will touch on the most disturbing points.

At mark 1:05:00
They bring up a missionary family to be prayed over.  This family just returned from 6 months of missionizing in Israel.
McDowell says "They go intentionally to Israel preaching the gospel."

At mark 1:34:00 Fitzpatrick prays,
"We want to wrestle in the first visitation on churches, L-rd G-d, and synagogues. Father, we pray for a visitation in all synagogues within this city.  Would your spirit move upon them."

At mark 1:40.00- 1:52:07
Thomas Boehm, a jewish believer,  and Lyndon Allen a black xian preacher, speak about the unity between Jews and gentiles in yeshu which is referred to the One New Man. Thomas Boehm's father Frank is a former president of the Jewish Federation of Nashville. Frank cried when Thomas first told him that he was a believer in yeshu but eventually came around to accept it and now the two work together on behalf of Israel.  You can read about them here.

At mark 1:58.20-2:04:
Todd McDowell takes up donations that he will be taking to Israel with The Caleb Company in a couple of weeks. Those donations will be given, 10% to the Jewish community in Nashville, part to palestinian believers in Israel and the rest through a messianic organization in Ashdod to holocaust survivors. He claims the Israeli government asked a messianic leader in Ashdod to take care of these holocaust survivors.

For the past three months Fitzpatrick facilitated a learning program on Israel which brought in speakers to Grace Center every Wednesday night from August 25 until last week. Fitzpatrick writes in the ad for the series,

I am excited about facilitating a forum for various local leaders such as Don Finto, James Goll, Todd McDowell, Tommy Waller, and others along with hopefully bringing in some Washington D.C. connections like Bill Koenig.

Here we see Fitzpatrick is still working with Don Finto and James Goll. Bill Koenig and Tommy Waller are also listed. Koenig is listed as a special guest at the at the second event, the evening wine reception. 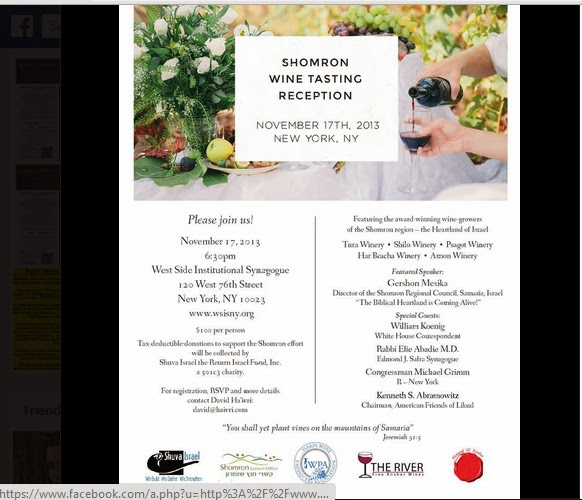 In an earlier ad Hayovel was listed as a sponsor.  They have been removed from the more recent ads, however, according to the facebook page of Hayovel volunteer, Jacob Meyers, he will be assisting Hayovel at the event. 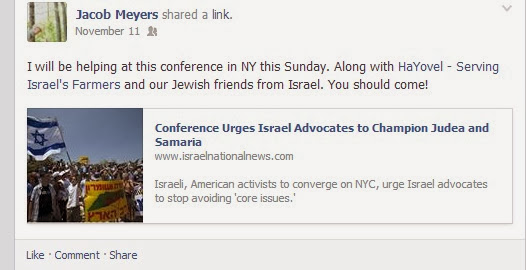